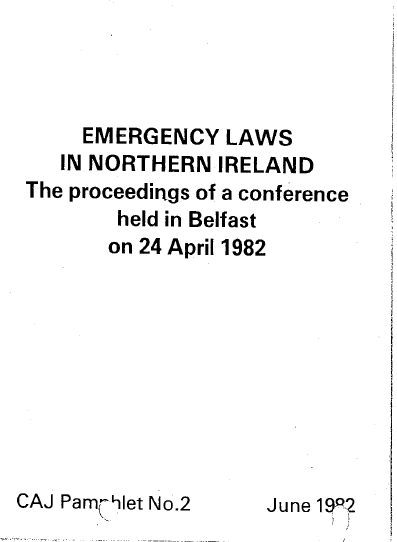 Emergency law in Northern Ireland was one of the principal themes of a conference organised by the Committee on the Administration of Justice at the Student’s Union, Queen’s University, Belfast, on April 24, 1982.

About 80 people took part in the conference, coming from all parts of the Northern Ireland community, and including lawyers, academics, social workers and probation officers, community activists, and members of peace groups and political organisations.

After hearing a substantial paper on the working of the Diplock system, and after a discussion in a workshop and in the full conference, the conference passed a number of resolutions including the call for a full scale review of the Emergency Provisions Act, and calling for specific changes in it, particularly in regard to the scheduling and descheduling of offences, interrogation practices and the admissibility of confessions, and to the practice of ‘screening’ arrests in which people are arrested solely as a means of gathering information.