This is a submission by the Committee on the Administration of Justice tot he review by the Rt. Hon. Sir George Baker OBE of the Northern Ireland (Emergency Provisions) Act 1978.

The terms of reference of the review are as follows: “Accepting that temporary emergency powers are necessary to combat sustained terrorist violence, and taking into account Lord Jellicoe’s review of the working of the Prevention of Terrorism (Temporary Provisions) Act 1976 as it affects Northern Ireland, to examine the operation of the Northern Ireland (Emergency Provisions) Act 1978 in order to determine whether its provisions strike the right balance between the need on the one hand to maintain as fully as possible the liberties of the individual and on the other to provide the security forces and the courts current with adequate powers to enable them to protect the public from current and foreseeable incidence or terrorist crime; and to report.”

CAJ cautions against the use of vaccine passports

Committee on the Administration of JusticeNews, Press releases, Submissions0 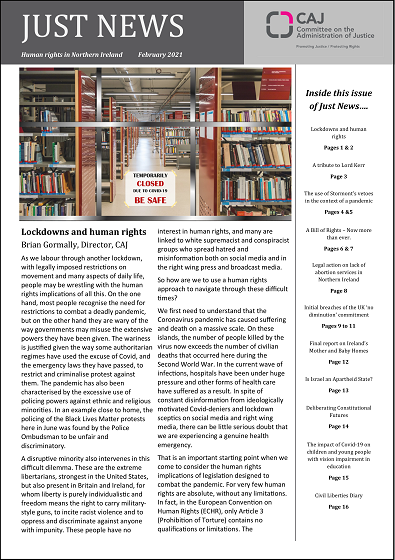