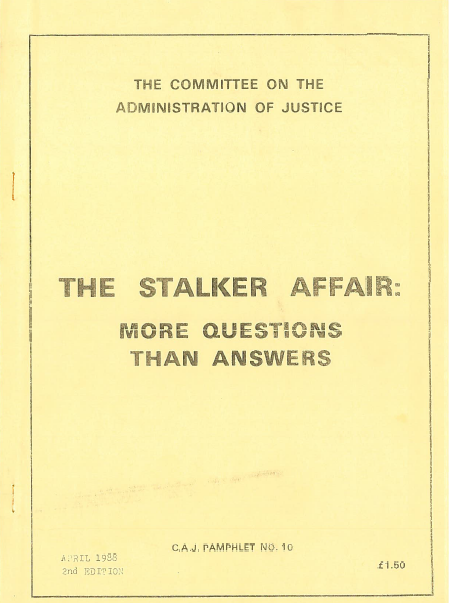 In 1982, several police suspects were shot dead by the Royal Ulster Constabulary (RUC) in circumstances which prompted allegations that the RUC was operating a ‘shoot-to-kill’ policy which ignored elementary principles of justice.

The subsequent inquest and strong suggestions of a ‘cover-up’ led, in 1984, to the appointment of John Stalker. Deputy Chief constable of Greater Manchester, to investigate the circumstances in which cover stories were fabricated and to establish whether any criminal offences had been committed.

From the Outset Stalker interpreted his portfolio liberally but in May 1986, when his report into six shootings by the RUC officers was virtually complete, he was taken off the case, informally suspended from duty by the Greater Manchester Police Authority and subjected to a distressing, controversial, fruitless, police inquiry into his own behavior.

Stalker’s removal from the Norther Ireland investigation coincided with his plans to interview the most senior RUC officers in order to finalise his report.

The timing of his suspension (or, technically, his enforced leave on full pay), the course of subsequent investigations into his conduct and the eventual hollowness of allegations against him led many observers to suspect foul play.

For instance, had stalker’s investigations been too thorough, resulting in damning criticisms of police and intelligence operations in Northern Ireland at a time likely to undermine police morale and effectiveness?

Whatever the verdict, as the Stalker affair unfolded throughout 1986-87, a tapestry of rich detail was unfolded worthy of some Kafkaesque novel.

Indeed, at the autumn 1986 conference of the Labour Party, one delegate spoke of ‘a whiff of the Dreyfus affair’ in the treatment of John Stalker, whilst another alluded to ‘a stench worse than a Venetian Cellar’.

In December 1986, Stalker resigned prematurely from the police force, an act which, if anything, has heightened public concern about the whole affair.