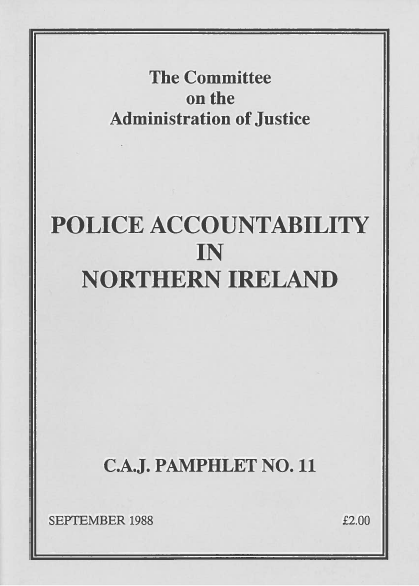 As part of a search for the best possible system of administering justice in Northern Ireland the committee on the Administration of Justice (CAJ) has studied two aspects of policing – the method of handling complaints against the police and the machinery for consultation between the police and the public (CAJ pamphlets no. 4 & 6).

In the course of studying these rather narrow subjects it became obvious that there is a broader subject, that of accountability, which is fundamental to every other aspect of policing, and that if the arrangements for the accountability of any public service it will be difficult to get a satisfactory system for any of the particular branches of activity of that service.

Moreover it is vain to strive after the acceptability of the police (without which it is acknowledged on all sides that they cannot hope to be effective) if the public do not have the confidence in the arrangements for police accountability.