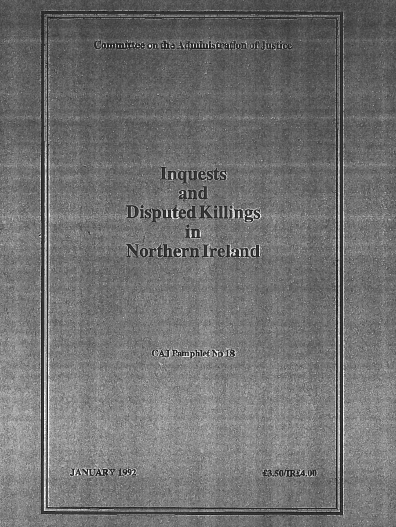 This pamphlet is concerned with the practice and procedures at coroners inquests which look into the various categories of unexplained deaths.

There has for some time been great concern about whether or not the inquests are a useful way of bringing to light the facts surrounding sudden, unexpected or suspicious deaths.

Such concern has not been limited to Northern Ireland. For example, in recent British disasters such as that which occurred at the Hillsborough football ground, the families of those who died have been far from satisfied that the inquests have uncovered all relevant facts.

The problems become more than acute when the information which families are looking for is held by closed institutions such as prisons, mental hospitals, the police or the Ministry of Defence.

Despite the secrecy which often pervades following suspicious deaths, the families of those who have died are entitled to all the facts surrounding the incident.