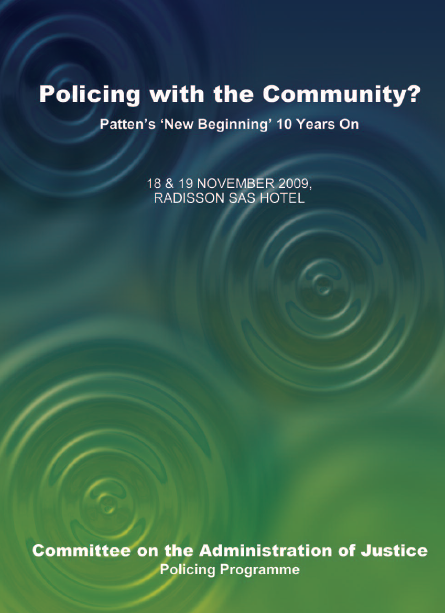 CAJ has worked on policing since its establishment in 1981. It followed closely the Patten process, and since then has monitored how these changes have been implemented and human rights standards complied with. This conference, organised by the Policing Programme in CAJ, sought to examine Patten ten years on.

Anchored in the Patten Report, the purpose of the conference was to look critically at the current state of policing and to explore where we are in the ongoing process of police reform. Plenary sessions engaged with aspects of Patten’s pivotal 44th recommendation, “that policing with the community be the core function of the proposed new police service as well as every police station.” Attended by 175 delegates over two days, discussion focused on the workings of the accountability mechanisms, the current state of community/police relations, the dynamics that hinder or facilitate developing relations, and the implications of community policing for the structure and management of the police, and for human rights, accountability, equality and community safety.

What remains clear is that the full implementation of this new style of policing is not without its challenges. Issues raised in the conference include: the continuity of neighbourhood police officers, the tactics and culture of response teams and response times, the lack of officers during peak hours, and the lack of emotional intelligence in some officers. Other issues at the heart of community concerns relate, not surprisingly, to police powers and in particular the use of stop and search conferred in Section 44 of the Terrorism Act 2000. A second core issue is the policing legacy and it remains clear that the future of policing is intimately linked with how we deal with the past. Improvements are needed and there is a high level of frustration that information is not forthcoming in relation to past cases and that often families need to resort to the legal system to force production of documentation and circumvent resistance by the police.

The distinction between the police and policing remains a critical one and existing mechanisms, including the Policing Board, are meant to be about more than simply ‘the police.’ In practice however, participants note that the District Policing Partnerships do little to bridge the gap between communities and the PSNI. Instead the orchestrated, controlled style and bureaucratic tone of these forums often delimits the space for communities to participate in policing and marginalises the very communities a policing service should be in partnership with. By extension, in terms of service delivery, a gap also exists between what police policy looks like operationally and strategically, and how it is experienced on the ground in concrete situations.

The Patten recommendations detailed a way forward and an answer to the outstanding question of the form policing should take in Northern Ireland. We are on our way. However, the vast majority of these recommendations apply to policing in any democracy and very few engage with the unique cultural and political issues present in this society. It is clear that the future work of deepening democratic policing lies in the quality of engagements and the resolution of ongoing community issues and outstanding historical concerns.