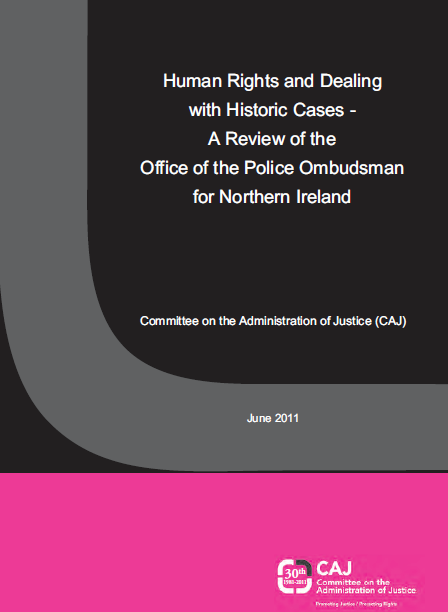 The Committee on the Administration of Justice (CAJ) has advocated for an independent police complaints mechanism since 1982 and continues to advocate that such a mechanism is essential to ensure public accountability of and thus confidence in policing in Northern Ireland. The current complaints mechanism – the Office of the Police Ombudsman for Northern Ireland (OPONI) – which was established by the Police (Northern Ireland) Act 1998 began operating eleven years ago in November 2000. Five years into its existence in 2005, CAJ produced a commentary on the operation of the Office. That commentary was comprehensive and looked at a wide range of the Police Ombudsman’s powers and activities and made a number of detailed recommendations for change. A further six years on, this report does not seek to provide a similarly broad assessment and so does not repeat the ground covered in that commentary; instead this report focuses specifically on the Office’s fitness for purpose in relation to historic cases arising from the conflict.

There are a number of catalysts for this approach. For many years now, there has been a debate about how to deal with Northern Ireland’s past. This debate has engaged many thousands of people and an expectation has been created among them that the legacy of the conflict in Northern Ireland would be substantially and comprehensively addressed. However to date this has not happened, and many victims and survivors continue to have unanswered questions.

Engaging in these longstanding debates on dealing with the past, CAJ continues to advocate that a mechanism is required to deal with the past in a comprehensive and human rights-compliant way. In the absence of such a mechanism, it has fallen to a number of institutions to conduct investigations into individual cases; including the Historical Enquiries Team (HET) set up by the Police Service of Northern Ireland (PSNI) to investigate all deaths that occurred during the conflict, and the Office of the Police Ombudsman to investigate those involving complaints against the police. Thus the Police Ombudsman has a ‘dual mandate’: investigating both ‘normative’ day-to-day complaints and acting as a surrogate truth recovery vehicle by investigating historic cases involving complaints against the police.

However, as a result of concerns arising from recent cases related to the past handled by OPONI, together with the ongoing absence of any broader mechanism to deal with the past, CAJ believes it is vital to examine the extent to which OPONI meets the standards required of Article 2 compliant mechanisms. This report raises a number of concerns in that regard.