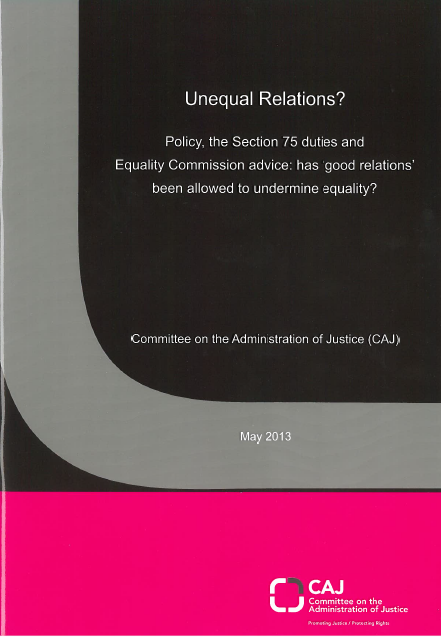 On 23 May 2013 the Office of the First and deputy First Minister published the ‘Together: Building a United Community Strategy.’ This document confirmed a proposal, reported by the BBC back in January 2013, 1 to rename the Equality Commission the ‘Equality and Good Relations Commission’ and grant the body additional community relations powers. The Strategy also envisages an augmented ‘good relations’ impact assessment. This move has brought additional focus on long standing concerns raised by rights based NGOs and Council of Europe treaty bodies, that the existing ‘good relations’ duty is being interpreted and applied in a manner which actually undermines equality.

The Equality Commission has existing competence in the area of ‘good relations’ as, in addition to duties under anti-discrimination legislation it advises public authorities on the Section 75 statutory duty which, as well as containing an equality duty, obliges them to “have regard to the desirability of promoting good relations between persons of different religious belief, political opinion, and racial group.”

CAJ, along with the trade union UNISON, co-convenes the ‘Equality Coalition’ a network of NGOs which have campaigned for the effective implementation of the section 75 duties. The origins of this research are based in concerns that the Equality Commission was not implementing its mandate as effectively as it could in advising on the implementation of the duties. A scoping exercise revealed that an area with a significant body of commentary, evidence and concerns was the application of the ‘good relations’ duty. It therefore appears an opportune moment, particularly in the context of the ‘Together: Building a United Community Strategy’, to take stock of how the ‘good relations’ duty has been developed, interpreted and advised upon to date.

Since that time there have been ongoing challenges, raised both by rights-based NGOs and two Council of Europe treaty bodies, in relation to interpretation of the ‘good relations’ duty in a manner detrimental to equality and human rights imperatives. This has particularly been the case on policy relating to socioeconomic rights, especially housing, and also in policy on the Irish language. The issue is often manifest at the point of policy appraisal.

The role of this research is therefore to set the context to the evolution of the duties since the Agreement and then to assess the interpretation, guidance and advice of the Equality Commission on the good relations duty against equality and human rights standards.

The methodology employed by this research is largely desk based involving an examination of ECNI statutory guidance on the duty and of the individual written advice the ECNI gives to public authority EQIAs. ECNI EQIA responses in three thematic areas were obtained under freedom of information legislation.

The first two chapters will deal with the origins of the good relations duty, its legislative passage, the concerns raised about its potential to conflict with equality imperatives, and how the concept could be harnessed in a positive and human rights compliant manner.

The following two chapters will deal in turn with critically assessing the written statutory guidance published by the Equality Commission in relation to the good relations duty, and subsequently the Commission’s advice to public authorities on a number of thematic areas.