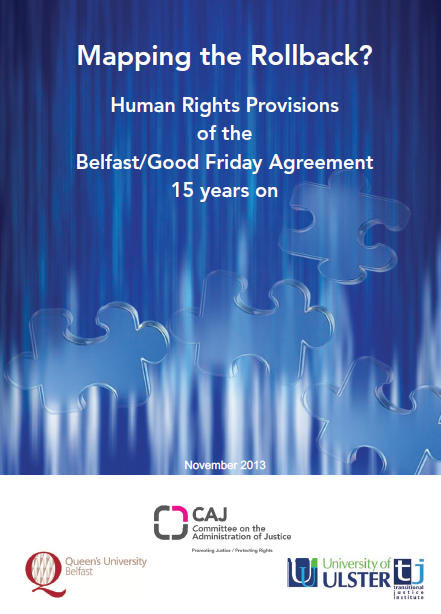 Report of a conference held in the Great Hall, Queens University Belfast, 26 April 2013

Organised by the Committee on the Administration of Justice (CAJ) in collaboration with the Transitional Justice Institute of the University of Ulster and the Human Rights Centre at Queen’s University Belfast.

CAJ in collaboration with the Transitional Justice Institute (TJI) of the University of Ulster and the Human Rights Centre at Queen’s University Belfast organised the ‘Mapping the Rollback?’ conference, which marked the 15th Anniversary of the Belfast/Good Friday Agreement. The conference took place in the Great Hall, Queens University Belfast on the 26 April 2013 and was attended by a full capacity audience of around 150 delegates from across civil society.

The objective of the conference, and this report, was precisely to ‘map the rollback’ from the human rights commitments made as part of the 1998 Belfast/Good Friday Agreement and its subsequent implementation Agreements (Weston Park Agreement 2001, Joint Declaration 2003, St Andrews Agreement 2006, Hillsborough 2010) and the various reviews and commissions (e.g. the Independent [Patten] Commission on Policing) which emerged as part of the process.

Whilst not taking a position on the 1998 Agreement per se (given as it dealt with the constitutional status of Northern Ireland on which we have no view) CAJ, along with others, did make substantial efforts to ensure human rights were mainstreamed into the peace settlement and Agreement itself. There was considerable success. A cursory search of the text of the Agreement showing that the words ‘right’ or ‘rights’ appears 61 times and the then UN High Commissioner for Human Rights, Mary Robinson noted “…the Good Friday Agreement is conspicuous by the centrality it gives to equality and human rights concerns.” The range of subsequent international Agreements between the two sovereign governments to implement and take forward the settlement also contained a number of human rights commitments (although unfortunately no dispute resolution mechanism to assist implementation). CAJ has long pressed for enforcement to ensure that the elements of the peace settlement which do protect human rights are, and continue to be, implemented. It is important to stress that these provisions were not mere manifesto commitments by governments now out of office but rather provisions which were enshrined into bilateral (UK-Ireland) treaties and international agreements between them which are binding in international law.

At the time of the conference a significant part of official discourse on the peace settlement had veered towards an ‘end of history’ narrative which sought to project the idea that, following the devolution of justice and the Assembly completing a full term, the final blocks of the peace settlement had been solidly put into place and were indeed a model for the world. This official narrative was by then already being checked in the context of the flags protests, and has been further dented since by instability in power sharing and the unresolved crisis issues in the political process which have led to the current ‘Panel of Parties’ talks chaired by Richard Haass. Two central issues to the Haass talks, the first parading and the second flags and emblems, were ironically two issues for which a framework was to have been provided by the unimplemented Bill of Rights committed to in the 1998 Agreement.

Well before this, and in contrast to official optimism, increasing concern had been expressed by CAJ and other human rights organisations that there had been and continue to be persistent attempts at a ‘rollback’ by the state, or elements within its institutions, of the human rights provisions of the Agreements. This includes commitments made as part of the settlement which have never been implemented and areas where institutional and policy gains were made which are now being undermined.

This encompasses unimplemented commitments to legislate for a Bill of Rights and Irish Language Act, introduce an anti-poverty strategy, the lack of full implementation of the statutory equality duties, and commitments to repeal emergency law. There is even the current threat to the European Convention on Human Rights which the 1998 Agreement guaranteed the incorporation of into Northern Ireland law. Some commitments like the ‘right of women to full and equal political participation’ and to supporting young people from areas affected by the conflict have never had a delivery mechanism to take them forward. There has been regression in commitments to victims services, a drift away from commitments to tackle inequality on the basis of objective need, and to remove employment barriers for ex-prisoners. There was also the slow pace of some justice reform and the undermining of the independence of key peace settlement institutions such as occurred during the tenure of the second Police Ombudsman. Policing also has seen regression from the Patten blueprint – most notably in the 2007 transfer of the most controversial area of policing (‘national security’ covert policing) away from the PSNI and all the post-Patten oversight bodies to the Security Service MI5. There is also the fate of the Irish governments institutional and reform commitments under the Agreements.

There were some areas of human right related policy which were not dealt with by the Agreements, including a transitional justice mechanism to ‘deal with the past’ (and notably one prominent related commitment in the Agreements – to hold a public inquiry into the death of human rights lawyer – Pat Finucane has been reneged on). Nevertheless the Agreements did provide a significant number of human rights frameworks and commitments designed specifically to address the problems of the conflict. Notwithstanding the progress of the peace process to date, the conference aimed therefore to discuss and map an alternative view to prevalent official discourse at the time that matters were largely concluded. Namely, that there is still plenty unfinished business in relation to the human rights commitments made as part of the settlement designed to address long standing problems which will continue to manifest themselves if not dealt with.

Colin Harvey of Queens University chaired the opening session in which Professor Monica McWilliams (TJI) provided reflections of a participant in the peace negotiations and CAJ Deputy Director Daniel Holder presented CAJ’s ‘Mapping the Rollback’ paper, an updated version of which is included in this report.

Following the morning plenary four specialist sessions were held on the subjects of Protection of Rights Frameworks fifteen years on, Equality fifteen years on, Policing, Security and Justice Reform and Dealing with the Past. This report contains the available papers and speeches from the above and we hope both ‘maps’ and provides a platform to challenge the rollback.