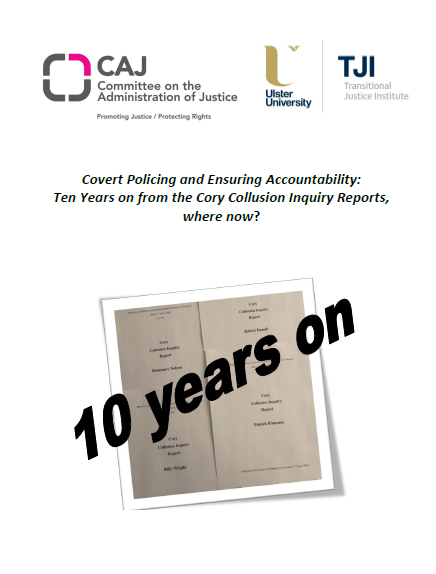 The conference explored the themes of covert policing, particularly the running of agents/informants and use of intelligence, and address contemporary and historic questions of human rights compliance and developing a framework to render such practices lawful and accountable.

The discussion covered perspectives on past covert policing policies in Northern Ireland, and the extent to which they facilitated ‘collusion’. It highlighted the powers of current accountability bodies including the Police Ombudsman and Policing Board, the effectiveness the post-Cory public inquires and explored questions of legal-ethical frameworks to regulate the use and conduct of informants and agents. The conference featured presentations on the covert policing controversies in London and Germany, relating to the Stephen Lawrence family and ‘National Socialist Underground’ cases respectively. It also covered the growing issue of the use of intelligence evidence in ‘exceptional’ court proceedings and the growth of the ‘national security’ doctrine, which places many aspects of covert policing, past and present, beyond the reach of accountability bodies.

2014 marks ten years from the publication of Justice Cory’s Collusion Inquiry Reports, yet controversy over collusion and seeking to ensure covert policing is conducted within the law and is made accountable rumbles on. Recent revelations in England about the undercover activities of police in relation to the Lawrence family (for which the Home Secretary has announced an inquiry) and the infiltration of environmental protestors, have reopened discussion on the limitations of the Regulation of Investigatory Powers Act 2000 (RIPA), and how it does little to address the key question of regulating the permitted conduct of informants and agents. This in particular includes the extent to which informants are to be directed, facilitated or tolerated in involvement in criminal offences, including those constituting human rights abuses. Recent years have also witnessed the growth of a ‘national security’ doctrine, whereby the powers of accountability bodies are curtailed in their oversight of matters deemed to fall within this undefined concept. The use of intelligence as secret evidence in exceptional court processes has also grown both internationally and at home, with the Justice and Security Act 2013 extending ‘Closed Material Procedures’ across a raft of civil proceedings.

The post-Cory public inquires, the de Silva Report, declassified archives, the Police Ombudsman’s Operation Ballast reports, have all provided further information on the manner in which agents and informants were run in the past. Documents declassified by de Silva highlighting the modus operandi as “placing/using informants in the middle ranks of terrorist groups. This meant they would have to become involved in terrorist activity and operate with a degree of immunity from prosecution”. Yet there is no exemption in human rights law allowing informants to be involved in killings or other human rights violations, and it is not possible to operate a system which permits this within the law.

The Patten Commission recommended significant reform of covert policing including the downsizing, deinstitutionalisation and integration of RUC Special Branch within the PSNI. Patten also recommended the establishment of a “Commissioner for Covert Law Enforcement in Northern Ireland” overseeing surveillance and the use of informants, “to ascertain if covert policing was being used within the law and only when necessary” and the adoption of published legal and ethical guidelines on the handling of informants. This Commissioner was never established, and a manual on handling informants, whilst adopted has not been published. Nevertheless significant reforms have taken place within the PSNI, including following the Police Ombudsman’s Operation Ballast investigation, the introduction of a process whereby the involvement of an informant in a crime over and above membership of a proscribed organisation requires an authorisation from an Assistant Chief Constable.

However, from 2007 the primacy for covert ‘national security’ policing in Northern Ireland was switched to MI5 which sits entirely outside the post-Patten policing accountability bodies, and against whom complaints can only be directed to the Investigatory Powers Tribunal, a court which meets and makes judgements in secret, and never appears to have upheld a single complaint against the agency. A 2012 CAJ report ‘The Policing You Don’t See’ scrutinised this issue and uncovered that key accountability commitments relating to the MI5 arrangement had not even been implemented. This included the publication of high level Memorandums of Understanding (MoU) on how the agency would operate. Documents CAJ did obtain included however a MoU on national security matters and the Policing Board. This document, rather than being a safeguard, contains a list of restrictions on the Policing Board’s role including listing the types of information the Chief Constable should not tell the Policing Board, even in confidential sessions. The Policing Board, in addition to rebuking this MoU which they had never formally entered into and regarded as having no legal standing, responded to the CAJ report by taking forward further work examining the accountability framework for covert policing.

Northern Ireland does have one of the most powerful independent Police complaints bodies in the world, yet at the outset of 2014 questions were raised about the remit of the organisation to examine covert policing issues, and in particular complaints of informant recruitment. Notwithstanding some restrictions on the Office introduced by RIPA, the Ombudsman has stated that there is no area of police misconduct that it could not examine. There will of course be limitations when covert operations involve MI5, as the Ombudsman has no standing to investigate the agency. In 2013 the UK ‘National Crime Agency’ (dubbed the British FBI) was also established. Following concerns from CAJ and others that the NCA was to operate outside the post-Patten accountability arrangements, and instead be answerable to the Home Secretary, the Northern Ireland Executive did not agree to let the NCA operate in Northern Ireland with full police powers. Ministers confirmed however the NCA could still operate in Northern Ireland using its covert policing powers under RIPA, and the NCA become operational here without any accountability to either the Policing Board or the Ombudsman.

The ethics and operations of covert policing have been global news following the Snowden revelations in relation to mass surveillance, and there are calls for tighter regulatory frameworks to ensure covert agencies operate within human rights law. This conference addressed the same issues in relation to the use of intelligence and activities of agents, at a time when both past and present covert policing practices remain among the most controversial area of policing in human rights terms.