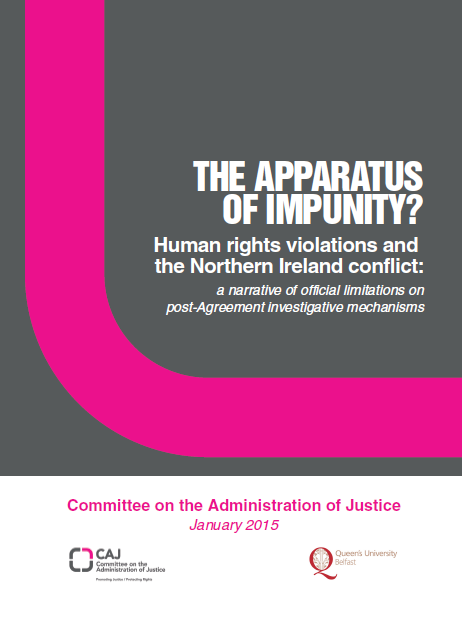 a narrative of official limitations on post-Agreement investigative mechanisms

To date there has been no overarching legacy commission or transitional justice mechanism to deal with the legacy of the Northern Ireland conflict. Instead a number of criminal justice system mechanisms examine unresolved conflict-related deaths. Such mechanisms were largely prompted by a series of Article 2 ECHR ‘right to life’ judgments in the European Court of Human Rights against the UK. This led to Government adopting a ‘package of measures’ it argued would meet its human rights obligations for effective, independent investigations. The package included changes to the inquest and prosecution systems. It also included reference to public inquiries, the PSNI Historical Enquiries Team (HET) and the Police Ombudsman’s role in investigating the past. Serious limitations however have become apparent in relation to these mechanisms which have militated against their capacity to provide accountability for human rights violations. Elements of the package have been shown not to have the necessary independence, effectiveness or impartiality to investigate state actors. Even those mechanisms which have been independent have faced limitations on their powers, delay or obstruction in undertaking their work.

Five years on from the 2009 Eames-Bradley proposals the 2013 Haass-O’Sullivan Proposed Agreement envisaged a single investigative mechanism, the Historical Investigations Unit (HIU), to investigate unresolved deaths. The December 2014 Stormont House Agreement committed to setting up the HIU as an independent body as well as other institutions to deal with the past. The proposed HIU has the potential to provide effective redress, yet the efficacy of such a mechanism will lie in the detail of how it operates. It is this which will determine whether it will succeed in conducting human rights compliant investigations and in achieving accountability. This report shines a light on how the current system of past investigation has been officially undermined and limited. In doing so it attempts to highlight which restrictions and practices would need to be addressed in the context of ensuring the proposed HIU and other mechanisms do not suffer similar flaws.