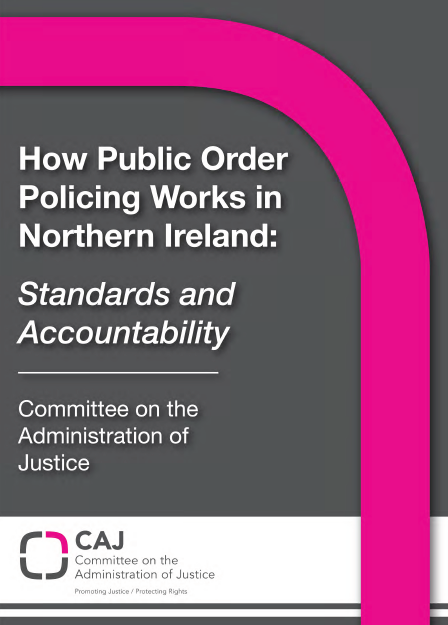 This document attempts to give an account of the standards to which the Police Service of Northern Ireland aspires when carrying out public order policing and some of the issues that arise. These standards are to be found in domestic legislation, a series of police guidance documents and international human rights instruments, primarily the European Convention on Human Rights. The complexity created by the intersection of these various formulations of standards is perhaps one reason why the police sometimes find it difficult to explain exactly what a human rights based approach to public order policing entails and why the public may find it hard to understand.

The project of working through the standards to create a coherent narrative is designed to identify decision points and the mechanisms through which the police are accountable for their decisions and actions. The hope is that any clarity achieved will reduce the scope for generalised accusations of political influence or bias and encourage critics to focus on the precise ways in which they think police decisions or actions were wrong. This should improve accountability both in identifying clearly where and how the police get things wrong and also a clear defence and rationale for decisions and actions which are right, albeit unpopular.

How the freedoms of expression and assembly are protected, facilitated and regulated are measures of the condition of the rule of law and its reliance on human rights standards in any society. In Northern Ireland, given our history and contemporary reality, the issue takes on particular importance. In a divided society, the benefits of a human rights approach include the fact that it provides an over-arching framework that transcends the particular perspective at any time of the two main communities. By making clear the human rights basis that should, and is claimed to underlay public order policing, it is hoped to help prevent this issue from threatening community relations and assist positively in a consensual approach to parading and protests.

The twin pillars of a human rights based approach are clear standards and effective accountability mechanisms that ensure they are met. In these documents we have tried to identify the standards and accountability mechanisms that apply in general, before a public event, on the day and after the event. There is a basic principle underlying all the detailed standards which is that no infringement of qualified rights can take place except where it is lawful, in pursuit of a legitimate aim, necessary and proportionate. This can be described as the “human rights test” and should be the foundation of decision making in public order policing.