Freedom of Information Tribunal Hearing 1-2 May

Proceedings were adjourned today 1 May 2018 before a sitting of the First Tier (Information Rights) Tribunal in Belfast when an agreement was reached between the PSNI, ICO and human rights group, the Committee on the Administration of Justice (CAJ) whereby the PSNI will disclose a redacted copy of the Walker Report to CAJ within seven days. This version of the report can then be put into the public domain within three months, or sooner if a Public Interest Immunity process is concluded first. The ICO, who had had sight of the report, told the Tribunal that the level of redactions is such that it could resolve the appeal at this stage.

The report, a review into RUC Special Branch and the handling of informants and intelligence, had been sought by CAJ under the Freedom of Information Act but its release was declined by the PSNI, citing an exemption that the contents of the report ‘related to’ MI5. This type of exemption is absolute, does not require the application of a ‘public interest test’, and was upheld by the Information Commissioner (ICO). CAJ appealed this decision before the Information Tribunal which had scheduled in a two day hearing on the matter for today and tomorrow, 1-2 May. As a result of the agreement the proceedings were adjourned.

“The Walker Report will assist in understanding just how RUC Special Branch was tasked to operate in the 1980s at a time there were serious concerns regarding the use of informants outside the law. It is an historic policy document that should not have been withheld for so long.”

“In terms of rights to access public documents human rights law no longer permits absolute ‘national security’ type exemptions. We therefore contested the use of what is a blanket power under the current Freedom of Information Act to withhold information that ‘relates to’ MI5. In addition, the contention that a whole report into RUC Special Branch ‘related to’ MI5 also contradicted the official position of RUC primacy at the time.”

“We welcome that agreement has been reached thus far and will assess our position on receipt of the document.”

On the 1 May 2018 the First Tier Tribunal, General Regulatory Chamber (Information Rights) sat at Laganside Courts, Belfast in Court 13 to hear case EA/2017/0219. Human Rights NGO the Committee on the Administration of Justice (CAJ) are the appellants, the first respondent is the Information Commissioner (ICO) and the second respondent the Chief Constable of the PSNI.  The hearing was scheduled for two days.

The case is an appeal by CAJ against ICO Decision Notice FS50640773 of the 30 August 2017. The decision upheld a decision by the PSNI to decline to disclose the Walker Report, relying on the exemption in Section 23(1) of the Freedom of Information Act 2000 (FOIA) on information that exempts disclosure if the information ‘relates to’ a number of listed security bodies in Section 23(3) FIOA. The bodies listed are MI5, MI6 and others, (but not the RUC or PSNI). The ICO Decision Notice is published and available at the following link:

About the Walker Report

The ‘Walker Report’ was commissioned by the RUC Chief Constable in January 1980, and related to a review of RUC Special Branch and the handling of agents, informants and intelligence. It was authored and named after Sir Patrick Walker, a senior MI5 officer who subsequently became the Director General of MI5 from 1988 to 1992.

The existence of the report was revealed by the UTV Insight Programme in 2001, and according to the Guardian it stipulated an approach where by RUC Special Branch would give priority to informants over solving crimes.[i] An RUC Force Order flowing from the Report, that among other matters required detectives to seek approval before planned arrests to ensure no RUC or Army agents were involved, has also been put in the public domain.[ii]

Our concern has long been that the Walker Report may have institutionalised an approach of informant handling at a time where it is now well documented there were concerning practices of collusion.

The Request for the Walker Report and the ICO decision

CAJ sought a copy of the Walker Report under FOIA in January 2016. On 2 March 2016 the PSNI confirmed they held the report but declined to disclose it citing the aforementioned s23(1) exemption. CAJ issued an Internal Review (appeal) to this on 3 March 2016, with the PSNI responding in 10 May 2016 upholding its initial decision.

On 4 August 2016 CAJ issued a complaint to the ICO challenging this decision and interpretation of the exemption. CAJ contended in summary:

The ICO focused on and upheld the PSNI decision to rely on s23(1) accepting the argument that although RUC Special Branch is not one of the bodies listed under s23(3) the material was covered by that exemption. As cited in the Decision Notice CAJ had argued (in reference to the transfer of primacy in 2007 for national security covert policing from the PSNI to MI5) “The fact MI5 assumed functions previously exercised by RUC Special Branch cannot elevate this organisation to the status of a 23(3) security body.” However, the Commissioner disagreed with this citing previous decisions by the Tribunal, confirmed the material related to RUC Special Branch, and upheld the refusal to release it.

The ICO Decision Notice was issued on the 30 August 2017, following this CAJ appealed to the First Tier Tribunal, it is this appeal to which the present proceedings relate.

The contact persons within CAJ in relation to these proceedings are: 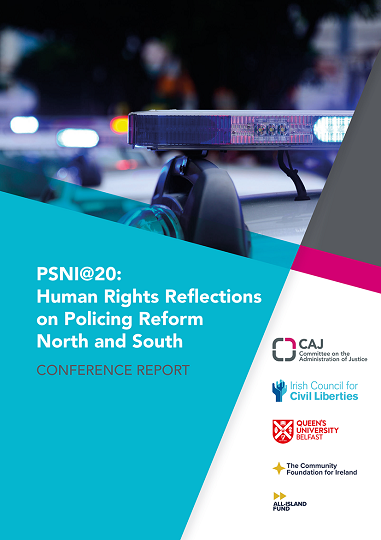 Police Reform North and South: Learning from the past and planning for the future