CAJ joins with seven other human rights organisations to call for an independent review of the UK’s Prevent strategy.

The government’s Prevent strategy – which forms one strand of the government’s overarching counter-terrorism strategy, CONTEST – seeks to pre-empt acts of terrorism by identifying those at risk of committing such attacks, including by ‘intervening to stop people moving…from extremism into terrorist-related activity’.

Developed without a firm evidence base and rooted in a vague and expansive definition of ‘extremism’, Prevent has been widely criticised for fostering discrimination against people of Muslim faith or background and chilling legitimate expression.

The Counter-Terrorism and Border Security Bill is currently passing through the House of Lords. Amendments 57 and 57A would require an independent review of Prevent.

We urge members of the House of Lords to support these amendments and take this opportunity to ensure Prevent is at last subject to independent review.

Committee on the Administration of Justice (CAJ)

Adriana Edmeades Jones, Legal and Policy Director of Rights Watch (UK), said: “In the face of mounting evidence that Prevent is undermining relationships of trust and chilling expression in classrooms and consultation rooms across the country, it is clear that Prevent is simply not fit for purpose.  It is in everyone’s interests – the communities who are targeted, the teachers, doctors and social workers tasked with implementing it, and the Government itself – that Prevent is subject to an independent review.”

Joy Hyvarinen, Head of Advocacy at Index on Censorship, said: “An independent review of the Prevent strategy is overdue and essential if the government wants to tackle the widespread doubts about Prevent. The House of Lords should ensure that the Counter-Terrorism and Border Security Bill includes a review of Prevent”

Brian Gormally, Director of CAJ, said: “If the categories, criteria and methods of Prevent were applied in Northern Ireland there would be an explosion of resentment in both Loyalist and Republican communities. Why then is it alright to use them in communities in Britain?”

Rachel Logan, Amnesty International UK’s Legal Expert, said: “Prevent is a highly dubious scheme built on shaky, almost evidence-free, foundations – it’s sorely in need of a proper review. Peers need to ensure that Prevent is rigorously and independently assessed, with all the human rights impacts of the scheme fully investigated.” 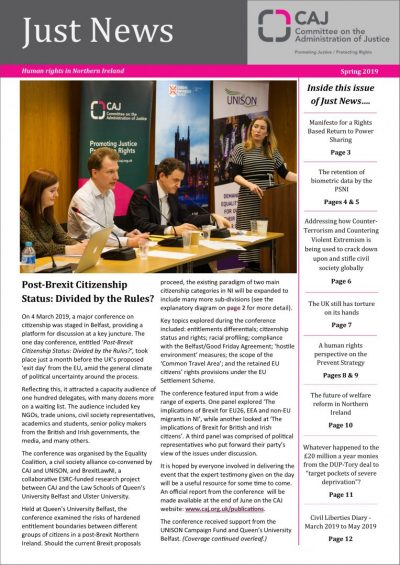 Committee on the Administration of JusticeJust News, News, Publications0

Briefing on the Counter-Terrorism and Border Security Bill 2018