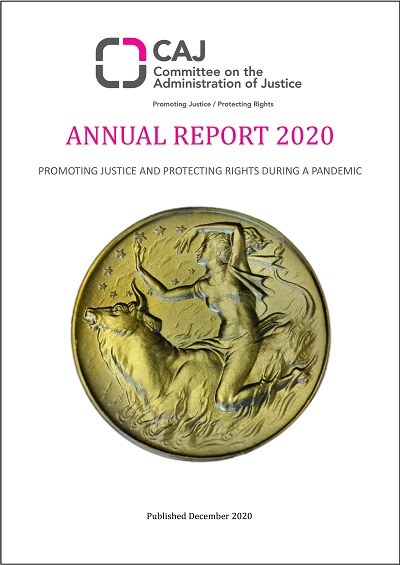 Since our last Annual Report, the world has changed. A pandemic grips the planet, with over 68 million cases of Covid-19 infection and over one and a half million deaths caused by the virus. This is the most significant change on a global level and there are many consequences for human rights, negative and positive. The eruption of the Black Lives Matter movement, sparked by killings of black people by police in the USA, has given a new impetus to the anti-racist struggle. The end of the populist, racist and irrationalist rule of Donald Trump as US President is also of global significance, giving hope to millions of people round the world but also leaving behind a damaged social and physical environment.

In our own part of the planet, we have seen the election of the Boris Johnson government with a large majority, a manifesto which threatened human rights and a developing reputation for incompetence and U-turns. The Ireland/Northern Ireland Protocol, agreed with the EU, appeared to have at least banished the prospect of a hard border on our island after Brexit. The Government’s introduction of the Internal Market Bill, which admittedly breaches the Protocol and hence international law, also breaches the Good Friday Agreement and again throws the spotlight onto this region in the context of the still incomplete (at the time of writing) negotiations between the UK and the EU.

We have also seen the re-establishment of the institutions at Stormont based on the New Decade New Approach document which contains many progressive commitments. While the Executive has struggled to deal in a unified manner with the pandemic, devolution is still operational. We particularly welcome the establishment of an Ad Hoc Committee on a Bill of Rights at Stormont – there is now at least another forum through which the arguments for a comprehensive Bill of Rights, including economic, social and cultural rights, can be pursued.

Meanwhile, the British Government, in contrast to commitments made most recently in the manifesto for the December election and the New Decade New Approach document, seems to have reneged on its promise to legislate to implement the Stormont House Agreement. A two page Written Ministerial Statement proposed a fast-track system with restrictions on prosecutions. The Government is also considering discriminatory impunity for soldiers and perhaps other State agents who were engaged in the conflict. This throws the whole area of legacy up in the air and creates another source of grief and bitterness.

We continue to struggle with the uncertainty in many areas of life caused by a chaotic Brexit process, which may still end up with a “no-deal” UK-EU future relationship at the end of December. Issues of citizenship and migrant rights have come to the fore, with resolution in some areas and none in others. At the same time, more and more people and organisations have been drawn into the fight for equality. This is absolutely basic to any human rights activism and the pandemic, in particular, has exposed the full levels of inequality and exclusion that shame our society.

The body of this report demonstrates how CAJ has responded to the challenges of this extraordinary year. In many ways, the report demonstrates the continuing relevance of a human rights approach to social ills, even when the global context changes. In other ways, this year has shown the need to be flexible and responsive as new issues, or old issues in new contexts, show themselves.

In the past few months, CAJ has been considering how its priorities need to develop as the world has changed and we have produced a new three-year Strategic Plan.

Complainants respond to ECNI’s investigation into the NIO legacy bill