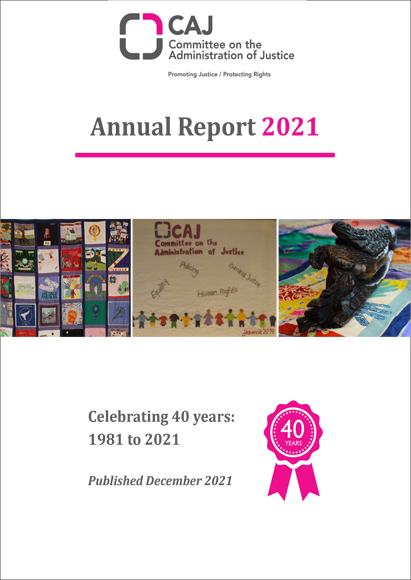 This year marks the 40th anniversary of the founding conference that established the Committee on the Administration of Justice. 1981 was one of the worst years of the Troubles, with 117 people dying, 10 of them on hunger strike and seven through being hit by plastic bullets. Many of the others were victims of armed groups of various kinds.

We lived in a cage of repression and violence. It was almost impossible to raise the principles of human rights amongst vicious, partisan warfare; callous government policy; the mass mobilisation of people for contradictory aims; and a pervading sense of helplessness and, hence, hopelessness.

In these circumstances, some 100 people attended the conference that led to the foundation of CAJ. The conference was called by a broad group of peace workers, lawyers, and community activists, who wished to reassert the importance of the rule of law and the impartial administration of justice, and consider whether “some more permanent unofficial body or forum should be established”.

According to Maggie Beirne’s history of CAJ, A Beacon of Hope, much of the motivation of those who attended was, “If you want peace, work for justice” – that is still one of the key motivations of CAJ today. From the same source comes a quote from a founder member of CAJ that, we hope, continues to be a characteristic of this organisation: “The legal arguments around emergency powers and criminal justice would be central, and the new organisation must be able to withstand any criticism that ‘you don’t understand the law’”.

We have endeavoured to honour the intentions of our founders in the past 40 years. Certainly, the human rights perspective in our small corner of the world has changed radically. In spite of all that remains to be done—as is detailed in this annual report—we have come a long way. Politically motivated violence has massively reduced, state repression has moderated, state torture has been eradicated, prisoners have been released, sectarian discrimination in employment is mainly a thing of the past, police reform has been carried through, and we have at least semi-functioning democratic institutions.

The struggle for human rights will never be completed as our aspirations must always outreach our present reality. However, though we have made progress, there are pressing human rights issues that face us today.

In last year’s annual report, we reflected on the way the world had changed with the advent of the Coronavirus pandemic. Unfortunately, we are still living in that changed world, with deaths and hospitalisations world-wide and continuing restrictions on daily life, in spite of the vaccination programme. CAJ has continued, and – on some measures – increased, its work for a rights based society.

During the pandemic, we have responded to restrictions that have been necessary to protect health with a balanced human rights approach. As part of this, we have made it clear that human rights standards are quite different from arguments grounded in individual libertarianism, which pay no regard to the rights of others.

Our work this year has taken place in the context of an increasing disregard by the current UK Government for the rule of law. The government has weakened the judicial review of government decisions in some areas, especially immigration. It has openly sought to restrict the role of the Human Rights Act, which incorporates the European Convention on Human Rights (ECHR) into domestic law, though the independent panel carrying out the review of the act has yet to officially report.

The recent CHIS (Criminal Conduct) Act allows MI5 and a range of other agencies to authorise criminal conduct by agents with no limitation on the nature of the crimes that could be committed. In our situation, where state agents have been proved to have taken part in crimes such as torture and murder in collusion with illegal armed groups, this law is very troubling.

Most shocking of all are the proposals for a total amnesty in regard to the Troubles, which are contained within the government’s Command Paper on legacy (published in July 2021) . These would not only provide for and end to prosecutions, but also ban all recourse to law of any kind in relation to Troubles “incidents”. We have yet to see any draft legislation, but the Government’s clear intention is to provide for total impunity for state agents, completely contrary to the rule of law.

Further shocking news came in late November. The Northern Ireland Human Rights Commission (NIHRC) had its routine five-yearly application for ‘A’ status as a national human rights institution deferred for a year by the international panel responsible for reviewing the applications. The main reason quoted was the reduction in funding declared by the Northern Ireland Office (NIO) which, according to the Commission, will “undermine the very foundation of the NIHRC in the discharge of its core functions”. One of the main protections for human rights contained in the Good Friday Agreement (GFA) is therefore at risk.

Additionally, the recent suspension of the Stormont Ad Hoc Committee on a Bill of Rights halts, for a time anyway, the latest attempt to fulfil the promise of the GFA on another of the major proposed protections for human rights. The Ad Hoc Committee heard a mass of evidence, which was mostly in favour of a comprehensive set of safeguards in a Bill of Rights. Meanwhile, polling shows support for a Bill of Rights amongst the general public. Nonetheless, the process has been brought to a premature halt and there is little chance of the present UK Government taking the initiative as is its responsibility.

The negative impact of Brexit has continued to affect everyday life here. We are seeing a punitive approach to some EU citizens and their families and this combines with the “hostile environment” policies to create problems for many vulnerable people. Last year, the Ireland/Northern Ireland Protocol was under threat from the international law-breaking Internal Market Bill. That threat did not materialise, but the attempted re-negotiation of the Protocol continues to create uncertainty and unrest. We need to be clear that the biggest threat to peace from Brexit would be the imposition of a hard land border on the island of Ireland, which would mean huge practical disruption, as well as a symbolic reversion to the past.

There are many other challenges to human rights, many of which are detailed elsewhere in this report. However, we believe that this year has again proved the worth of CAJ as an organisation that works meticulously to international human rights law and standards, and applies them to whatever current situation faces us. We produce policy advice and work to craft practical solutions to practical problems. In collaboration with many other people and organisations, we advocate, lobby, and, where relevant, litigate to achieve progressive change. That is our role and we hope to keep playing it, with the help of our loyal funders, for the coming period.

At the end of last year, we produced a new Strategic Plan (for 2021 to 2024), which is designed to reflect the developing circumstances in which our fight for human rights is being played out. In keeping with the idea of promoting a positive goal for human rights activists, within this strategy we have formulated our vision for a peaceful society based on human rights and equality. This brings together the necessarily interlinked activities of peacebuilding and human rights activism, as well as expressing our hope and aim for the future.

The strategy sets out a number of supporting elements or “pillars” that will help make this peaceful, rights-based society a reality. We will coordinate our work around these pillars going forwards. This annual report is therefore organised under these new headings.