This area of work was an unplanned addition to our priorities in 2016. Although we regarded the threatened repeal of the Human Rights Act and its replacement with a “British” Bill of Rights of unknown content as a threat both to human rights in general and the Belfast Good Friday Agreement in particular, last year we did not foresee the existential threat of the campaign for Brexit and the Leave vote. One of our fundamental priorities has been to make a reality of the unfulfilled human rights promises and commitments in the Agreement, pushing ever harder for a genuine rights-based society. The campaign and vote for Brexit, together with the increased chances of the repeal of the Human Rights Act, has forced us to defend what we have: a partially completed, partially successful peace process faced with the threats of constitutional uncertainty, if not chaos, and emboldened xenophobia.

Our opinion before and after the vote made clear that there were potential threats to human rights visible during the referendum campaign, which is why we unusually and specifically urged a Remain vote. CAJ would not normally take a position on constitutional arrangements, since different structures can offer equivalent human rights protections. In respect of the European Union itself, we noted back in February that its record on human rights was mixed. However, the context of the actual debate was that a Brexit victory would be led by the xenophobic Right and would lead to a “carnival of reaction.” In the concrete reality of the UK in 2016 a vote to leave, in what primarily transpired to be a plebiscite on migration, was a vote to reduce human rights protections.

While this is not the place to rehearse all the detailed implications of Brexit, it is important to lay out our basic policy positions. After the referendum result we said that:

Those voices leading the Leave campaign majored not on democratic or socio-economic deficits in the EU project but rather on nationalist sentiment, xenophobia and thinly veiled racism. This result will embolden them and place them in the ascendency.

So the first consequence of the vote has been the normalisation of anti-immigrant discourse, a huge boost for racist groups and an increase in racist attacks. From the perspective of human rights, this is perhaps the most dangerous scenario. Racism is a fundamental enemy of human rights. Human rights are universal, applying to everyone by virtue of their simple humanity – racism is the complete negation of that philosophy. Furthermore, it is insidious – once allowed into the political conversation it becomes the ready and available put-down of any attempt to express human solidarity.

The second area of concern is a retreat from the EU protections of workers’ rights, data protection, environmental and anti-discrimination legislation. Exiting the EU would remove a backstop for rights protection, making it easier for current or future governments to erode protections for workers’ rights and equality.

Thirdly, the withdrawal of EU peace and structural funds and the likely increase in austerity policies will affect many people. The expected ending of peace and structural funds will decimate the voluntary and community sector and remove support from many projects, such as ex-prisoner groups, which are vital for the peace process. Together, these economic pressures will pose a real threat to the social and economic rights of the most disadvantaged.

Fourth is the threat of a “hard” border on the island of Ireland and the threat to the Belfast Good Friday Agreement. A “hard” border would threaten the free movement across the island implicit in the Agreement and, even if the Common Travel Area is protected, could become the site of racial profiling as passports are demanded from those who look “different.” The issue of equality of Irish of British citizenship, so central to the Agreement, will be put at threat.

Lastly, as we have noted the referendum result may pose an indirect threat to the Human Rights Act, which incorporates the European Convention on Human Rights into UK law. There is a huge range of threats that this prospect makes to human rights protections on everything from the Agreement itself, through policing to dealing with the past.

In this context, we have been doing everything we can to explore the consequences of the Brexit vote and to prepare to fight for human rights protections and the Agreement that brought an end to our conflict as this dangerous process unfolds.

CAJ are working on a collaborative ESRC-funded research project with the Law Schools of Queen’s University Belfast and Ulster University- this project is entitled BrexitLawNI. For more information and research papers from the project please go to www.brexitlawni.org 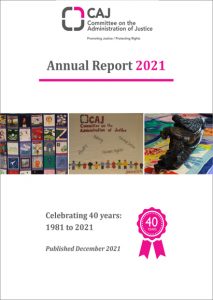 10/12/2021Committee on the Administration of JusticeAnnual Reports, Publications, Reports
This year marks the 40th anniversary of the founding conference that established the Committee on the Administration of Justice. 1981 was one of the worst years of the Troubles, with 117 people dying, 10 of them on hunger strike and seven through being hit by plastic bullets. Many of the others were victims of armed...

10/12/2021Committee on the Administration of JusticeNews, Press releases
Over 50 civil society organisations from across Northern Ireland – including CAJ –  have written to the First and Deputy First Minister of Northern Ireland to challenge the circumstances that led to the recent suspension of the Ad-Hoc Committee on a Bill of Rights. In an open letter, sent today (on International Human Rights Day),...

17/09/2021Committee on the Administration of JusticePublications, Submissions
The UN Human Rights Council has been examining concerns related to the Northern Ireland Office’s impunity proposals. In recent months, the UK has unilaterally departed from the provisions of the 2014 Stormont House Agreement (SHA). Instead, the UK now proposes introducing legislation that would include a statute-bar on investigating conflict related incidents, along with an...

07/09/2021Committee on the Administration of JusticeNews, Press releases, Publications, Reports
A team of legacy experts based within Queen’s University Belfast and CAJ have released a detailed report on the UK government’s recent ‘Command Paper on Legacy’. Since 2013, this team has produced a range of technical briefings and reports designed to help inform public debates on dealing with the past. The new report ‘Addressing the... 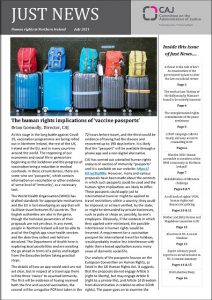 01/07/2021Committee on the Administration of JusticeJust News, News
Inside this issue: We examine the rights implications of vaccine passports and the government’s plans to alter the law on judicial review. Also, we cover the outcome of the Ballymurphy Inquest, which found the victims of the Ballymurphy Massacre to be entirely innocent. Other articles examine additional human rights issues, such as (the lack of)...

17/06/2021Committee on the Administration of JusticeNews, Press releases
An open letter endorsed by human rights NGOs, academics and lawyers has made fresh calls for the legacy commitments made in the New Decade New Approach Agreement to be returned to. The current British Government committed in the January 2020 (UK-Ireland) New Decade New Approach agreement to legislating for the SHA ‘within 100 days’. The...

The unimplemented rights commitments of the peace settlement 23 years on from the Belfast/Good Friday Agreement: A mapping exercise

09/04/2021Committee on the Administration of JusticePublications, Reports
This new paper from CAJ aims to ‘map’ the status of the principal commitments relating to human rights (including equality) made as part of the 1998 Good Friday Agreement (GFA) and the subsequent agreements that have emerged during the peace process. Many of these rights-based commitments still remain unimplemented. The paper ‘updates’ the mapping found...

CAJ responds to review of the Human Rights Act

04/03/2021Committee on the Administration of JusticePublications, Submissions
CAJ has responded to the Independent Human Rights Act Review. The review was set up by the UK government to ‘consider how the Human Rights Act (HRA) is working in practice and whether any change is needed’. We believe is important to see this review in the context of a long list of attempts by...

02/02/2021Committee on the Administration of JusticePublications, Submissions
The UN Special Rapporteur on the Promotion of Truth, Justice Reparations and Guarantees of Non-Recurrence is drafting a follow-up report to examine to what extent the UK has implemented recommendations made based on an official visit to the country in 2016. Civil society groups and national human rights institutions have been given an opportunity to...
Load More