At its broadest, the concept of contemporary accountability refers to the “guarantees of non-recurrence” of major human rights violations established following a conflict. It involves many areas of society but with the common aim of establishing a fair and just system in which all people can have trust and confidence.

In a narrower sense, the concept refers to the laws, mechanisms and institutions which govern and hold to account the actions of the state, especially those elements entrusted with coercive powers. The goal of transitional justice, the term used in regions overcoming a past of violent conflict and building a new polity, is a society based on human rights and the rule of law. Progress towards that goal is essential if peace is to be based on confidence by all people in the institutions of state. Arguably, such progress is even more essential in a situation like ours where people with different national aspirations and even allegiances must share the same political and geographical space. One of the keys to contemporary accountability is policing and Justice.

05/08/2022Committee on the Administration of JusticePublications, Submissions
Our latest submission to the Committee of Ministers was drafted for consideration at the upcoming 1443rd meeting (September 2022) of the Ministers’ Deputies. It focuses on issues related to the deeply flawed Northern Ireland Troubles (Legacy and Reconciliation) Bill, which is currently progressing through the UK Parliament. Download the submission here. What is the Committee...

04/07/2022Committee on the Administration of JusticeNews, Press releases
CAJ has welcomed a statement from the Council of Europe Commissioner for Human Rights, released earlier today, which raises serious questions about compatibility of the UK’s legacy bill with the European Convention on Human Rights (ECHR). Commissioner Dunja Mijatović’s issued the statement following a five-day visit to the UK, including Belfast. The statement is available... 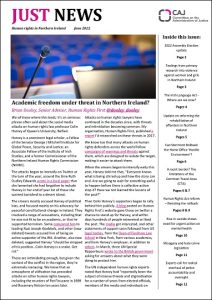 21/06/2022Committee on the Administration of JusticeJust News, News
Inside this issue: We examine whether academic freedom is under threat in Northern Ireland in our cover story. Elsewhere, we highlight new research from the Women’s Policy Group NI (WPG), which shows the impact of violence against women and girls in NI. We also look at other pressing rights issues in additional articles, such as...

24/05/2022Committee on the Administration of JusticeNews, Press releases
Report finds that bill would be “unworkable”, in breach of the Good Friday Agreement and international human rights law and would not deliver for victims and survivors. The Model Bill Team – led by Professor Kieran McEvoy and made up of academics in the School of Law at Queen’s University Belfast and experts from CAJ...

24/05/2022Committee on the Administration of JusticePublications, Submissions
Comprised of experts from QUB and CAJ, the Model Bill Team has worked for almost a decade to find human rights compliant solutions to the legal and political challenges regarding dealing with the past in Northern Ireland. The group has analysed the Northern Ireland Troubles (Legacy and Reconciliation) Bill – which is currently on its...

17/05/2022Committee on the Administration of JusticeNews, Press releases
The Committee on the Administration of Justice (CAJ) has strongly criticised the UK government’s new legacy bill (as introduced into the UK Parliament today) and has called for it to be scrapped in favour of the prior proposals in the Stormont House Agreement. CAJ is highly critical of a number of aspects of the Northern...

10/05/2022Committee on the Administration of JusticeNews, Press releases
CAJ raises serious concerns about the legacy commitments arising from the Queen’s Speech. Brian Gormally, CAJ Director, commented: “Today’s Queen’s Speech contains a commitment to bring forward legislation to ‘address the legacy of the past’. Details are scant, but it seems that all recourse to law for victims in relation to ‘incidents’ during the conflict... 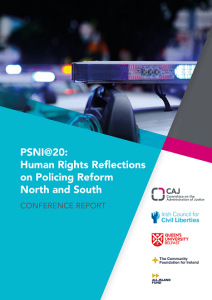 24/03/2022Committee on the Administration of JusticePublications, Reports
On 5 November 2022, CAJ held a joint conference with ICCL to reflect on policing reform on the island of Ireland. ‘PSNI@20: Human Rights Reflections on Policing Reform North and South’ was a hybrid event held in the Great Hall at Queen’s University Belfast, featuring a range of expert speakers. It took place following the...

24/03/2022Committee on the Administration of JusticeNews, Press releases
Two leading human rights organisations on the island will today call for better oversight of police intelligence. With key reform legislation before the Oireachtas, CAJ and the Irish Council for Civil Liberties (ICCL) have assembled international experts on accountability and intelligence. Policy makers, practitioners and academics will also call on An Garda Síochána and the...
Load More